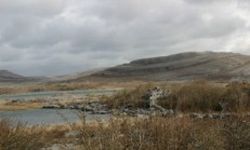 ‌The Burren region of North West Clare extends over some 450 sq. km. and possesses a number of features which have made it internationally renowned. The spectacular topography of the area provides the geographer with a unique opportunity to identify and record cultural and physical phenomena. It is possible to study elements of the ancient and modern landscapes such as boundaries, settlement types and patterns. The physiographic is ideal for the investigation of erosional and depositional processes.

Botanically, the Burren is one of the most interesting sites in Europe because of the unique features which distinguish its otherwise typical limestone flora. The occurrence, from hilltop to sea level, of Artic-Alpine and Mediterranean species in close association is perhaps the area’s most remarkable feature; the unusual composition of the wetland, the scrub and the limestone heaths, together with the local abundance of plants elsewhere rare in Ireland, further underline the scientific importance of the Burren.

The area is rich in archaeological remains. Over 60 megalithic tombs have been recorded and several, including the portal tomb in Poulnabrone and the wedge tomb in Gleninsheen townland, are within a few miles of Carron. There are several hundred ringforts, mostly unsurveyed; of note amongst these are the 9th century fort of Cahercumaun and Ballykinvarga fort with its stone chevaux-de-frise.

Below is a map of the burren region, showing the location of the Máirín de Valéra Carron Field Research Station.

Some features need cookies to work properly. Cookies also let us (a) remember your preferences, (b) collect anonymous usage statistics, and (c) manage any online ads for nuigalway.ie.